This is my last official blog post of 2012, (I will announce the winners of the book giveaway on Wednesday) so I would like to wish my readers a Merry Christmas and /or Happy Holidays and a Happy New Year. See you in January. 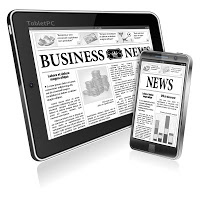 Over the last few years, there has been a growing trend amongst newspapers to implement paywalls. Papers moving forward with paywall initiatives include such prestigious papers as the New York Times and Wall Street Journal. As described in this Wikipedia

, a paywall is a system that prevents Internet users from accessing webpage content, most notably news content, without a paid subscription.

I find this transition fascinating. The change falls somewhere in the middle of being a sustaining technology and a disruptive technology – if one could apply technological jargon to this situation. There are alarming similarities between the transformations the newspaper industry and music industry have been forced to undergo in the last 5 years or so. While the revolution in the music industry may have been more radical and accelerated, it is still similar in many ways to the changes newspapers have had to make in order to survive.

I see the following similarities between these two industries:

Music in many forms became freely accessible to the public (whether legal or not is another discussion). Many newspapers and other Internet sources have been providing free access to news, sports, and entertainment etc. for several years now.

The music industry could not stop/or unwillingly let the genie out of the bottle and Apple, via iTunes, capitalized by providing a low cost music option in the legal download world. Newspapers are now trying to shove their genie back into its bottle by creating paywalls and charging for access to online news.

The entire newspaper industry seemingly overnight is battling a societal shift, in which consumers expect free online content and are very hesitant to pay for such information. It is interesting to note that in Toronto, two popular free newspapers, The Metro and 24 Hours, are owned at least in part, by the owners of the Toronto Star and Toronto Sun respectively.

The Globe and Mail (“G&M”) recently went to a paywall when it launched its Globe Unlimited digital subscription service for its Globeandmail.com website and apps. The other three Toronto papers have also announced paywall intentions for 2013.

While paywalls result in extra revenue for newspaper companies (charging for online content or creating demand for hard copy subscriptions), that revenue is often negated at least in part, by a decrease in advertising revenue. According to this article in the International Business Times , the New York Times increased subscription revenue by 8% in its second quarter of 2012 including paywall revenue, but had offsetting advertising revenue losses of 7%.

This July, 2011 article reflects how the implementation of a paywall can radically decrease online traffic once it goes up (it is my personal uneducated opinion that these numbers are understated as many papers offer some free online content or allow for a certain level of free visits that distort the true loss of readership). I would have liked to have been a fly on the wall when the NY Times held their initial meetings discussing the business case of implementing a paywall. You can imagine a boardroom filled with marketing, accounting and newspaper people, all with different agendas and ideas, sitting around a table trying to figure out if they will lose 10% or 40% of their online readers and how many readers the paper will require to become paid online or newspaper subscribers to compensate for the immense loss they will incur in online and hard copy advertising revenue. The revenue discussion does not even account for the issue of whether the people who stop visiting your site once the paywall is established, will ever return to your site for any free online content.

As noted above, the G&M recently implemented a paywall. They used the following pay structure: G&M newspaper subscribers were granted free online access. Casual online visitors are allowed up to 10 pieces of G&M content per month for free, after which they need to subscribe to Globe Unlimited or they will not be able to access anymore articles for that month. A Globe Unlimited trial is available for 99¢ for the first month, after which the cost is $19.99 per month.

As a G&M newspaper subscriber, I have free online access. If I decided to stop my newspaper subscription, I would pay the $19.99 per month. However, I am an avid newspaper reader for both personal enjoyment and because I need to stay abreast of what is happening financially because of my blog and profession. However, I am not sure in this day and age of free content that everyone feels the same. It will be interesting to see how the various Toronto papers’ paywall implementations are accepted or rejected by their readers. Their reaction will shape those newspapers and the Canadian newspaper industry for a long-time to come; or possibly a short-time to come, for those with less than compelling online content.

P.S. For those visually inclined, check out this interesting infographic on paywall trends.

Newspaper Paywalls – The Future or the Last News Stand?